I’ve really enjoyed putting achievements in games, and well designed ones can get a great response from players. There’s a dark art to making them both fun and compelling, rather than a forgettable chore. So, here are the lessons I have learned in list-orial format.

7. Give one for something really, really easy. This A) lets players know that this game has achievements and how they’ll be delivered, and B) gives a little positive feedback for them helpfully opening the game/trying the first level. If you think super simple achievements are silly, then you could always give it a sarcastic name.

6. Understand the effects of achievements. For most players, they give a small endorphin kick and increase engagement. They can provide a reason for exploring, or returning to parts of the game to dive deeper. They can even function as status symbols, where only 0.1% of your players are worthy of an achievement.

5. Understand the negative effects of achievements. A segment of your player base will gun for achievements like meth addicts. Players may be stuck in parts of your game far longer than they are having fun, because the reward mechanic is stronger than their self-control. As a dev, it is your responsibility to make the achievements a fun addition, rather than a way to force player behaviours. 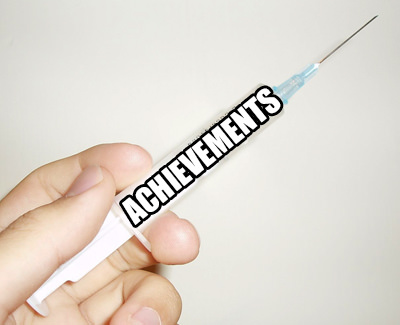 “Yeah, hit me with a Platinum, that’s the good stuff.”

4. Space set piece achievements wisely. Far too many games give an easy achievement, and then nothing else until the credits – the rest are tied into completionist challenges or absurd coincidence. I would strongly suggest having progress achievements regularly spaced through the campaign. Many games are divided into “chapters” or “worlds” that make this a no-brainer.

3. Preserve some mystery. I like having suggestive titles that don’t explicitly say an achievement’s requirements, but still give enough to let the player guess. When it has been finished, more information can be available describing the achievement’s exact conditions.

“So, this achievement isn’t in the bedroom…”

2. Make a joke! Not every achievement needs to be serious or particularly difficult. Great examples include “That Guy” from Move or Die after annoyingly running into other players, or even better, the “Click On Door 430 Five Times” routine from The Stanley Parable.

1. Tie in gameplay effects. An achievement system that gives a reward that can be spent in-game will have players caring far more about it. This brings achievements into part of the core gameplay loop, which in the right game is extremely powerful.

With that, “achievements” doesn’t look like a real word any more. Develop responsibly!

RSS
This entry was posted in Listorial, Tutorials. Bookmark the permalink.

4 Responses to 7 Steps for Better Achievements