Hot on the heels of his early access launch of MoonQuest, I got the chance to speak to Ben Porter about its creation. He has written about the somewhat arduous 7 year journey, involving Kickstarter and numerous extra activities on the way. At last, the game is out, though Ben isn’t done finished with the project just yet.

Congratulations on the launch of your game! What were the biggest inspirations going in to MoonQuest?

Ben: Thanks! Minecraft, Nethack, Terraria, and Spelunky are the biggest inspirations for the game, and I like to feel like I’ve absorbed some goodness from each. With that said, MoonQuest actively tries to be its own thing, and doesn’t really fit the genres of any of those games. My earliest ideas for some of the things in MoonQuest go back decades, to when I was a child, designing how a character in a game might have different armours, weapons, etc.

You’ve written about the extended dev period dating back 7 years. Given a time-travelling email server, what advice would you give yourself 7 years ago?

B: I’d definitely send myself the article, but in addition I’d tell myself to be wary of having two competing motivations: learning how to make a game from scratch, and making a great game. I would tell my past self to just do one or the other. I’d probably also tell my 2011 self that the new engine on the block, Unity, would become the defacto game engine for independent developers and that I should try to ship a commercial game in that first. 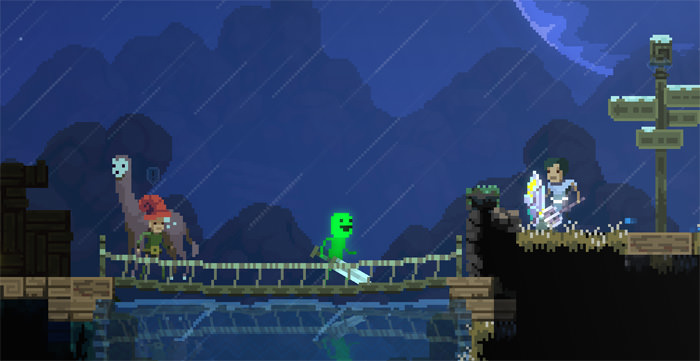 You’ve made all sorts of other projects, from Twitter toys to game jam entries. Have these changed your development process at all for major projects?

B: All my little projects feed back into my development. I’ve written a standalone dialogue generator, for instance, that I incorporated into MoonQuest, and now the NPCs all say random phrases. Design-wise I think all those prototypes and side-projects definitely influence the ideas I have for future games — all typically of a procedurally-generated nature.

You also created @Pixel_Dailies, where artists are challenged to make pixel art to a theme. Going back to old videos, it’s clear that MoonQuest’s art has come a very long way – are Pixel Dailies the reason?

B: It took years to figure out the basic MoonQuest style because I was a fairly novice artist. I started Pixel Dailies to improve, and I think it helped dramatically with MoonQuest. However, the main reason MoonQuest has improved is because of the work of two artists: G. P. Lackey, who did some amazing concept art and designed the style upgrade post-Kickstarter, and Alex McDonald, who has been solidly working on the game since around 2014, creating everything from the backgrounds, animations, character portraits, promotional art, and so on. I can’t overstate how much that MoonQuest is a collaborative effort.

What did you get right or wrong about the Kickstarter?

B: The Kickstarter was instrumental in producing MoonQuest, and without its success I would have had to release a very buggy and incomplete game into Early Access. The experience was 99% positive. The 1% badness was the fulfilment of the t-shirt backer rewards, which ended up being a nightmare due to reoccurring printing issues. I think the Kickstarter was successful primarily because of the many people who already knew about and supported the game — it was their enthusiasm that helped drive the publicity of it to help me reach the goal.

Did you get any advantages from coding everything yourself, down to the basic game engine?

B: In theory, the advantage I have is that I can fix, optimise, or reengineer any part of the system to suit my game. If I wanted to distribute it on another architecture, I could (again in theory), port all the code myself. However, the benefits of building your own engine have dramatically declined over the last decade. Unity, Unreal Engine, and Game Maker have become more powerful, cheaper, and more widely-used. Building your own engine these days is worthwhile if your game is relatively simple, if you’re an expert, or if your game does something substantially different (e.g., is based on some new rendering technology). My advice to anyone starting development on a new game: just use a commercial engine.

Finally, is Moonman ever seen without his glowing smile?

B: Some say his face is just painted on.

Thanks a lot to Ben for the chat! MoonQuest is out now in all good Steam libraries. Or find @eigenbom on Twitter and change his icon.